Marine Park zonings in Western Australia include the Great Southern Reef, Ningaloo and Shark Bay. These iconic coastal environments are home to kelp forests, seagrass meadows, and tropical coral reef: vibrant and unique ecosystems that are all under threat from ocean warming.

With enormous blue carbon potential, these bio-diverse hotspots are ground zero in the war on climate change. Philanthropically supported research at UWA’s Oceans Institute into these marine ecosystems and their conservation is providing innovative solutions for protecting their habitats.

In this webinar, hosted by Oceans Institute Director, Associate Professor Julian Partridge, four leading UWA marine scientists will discuss how their work is making a difference. 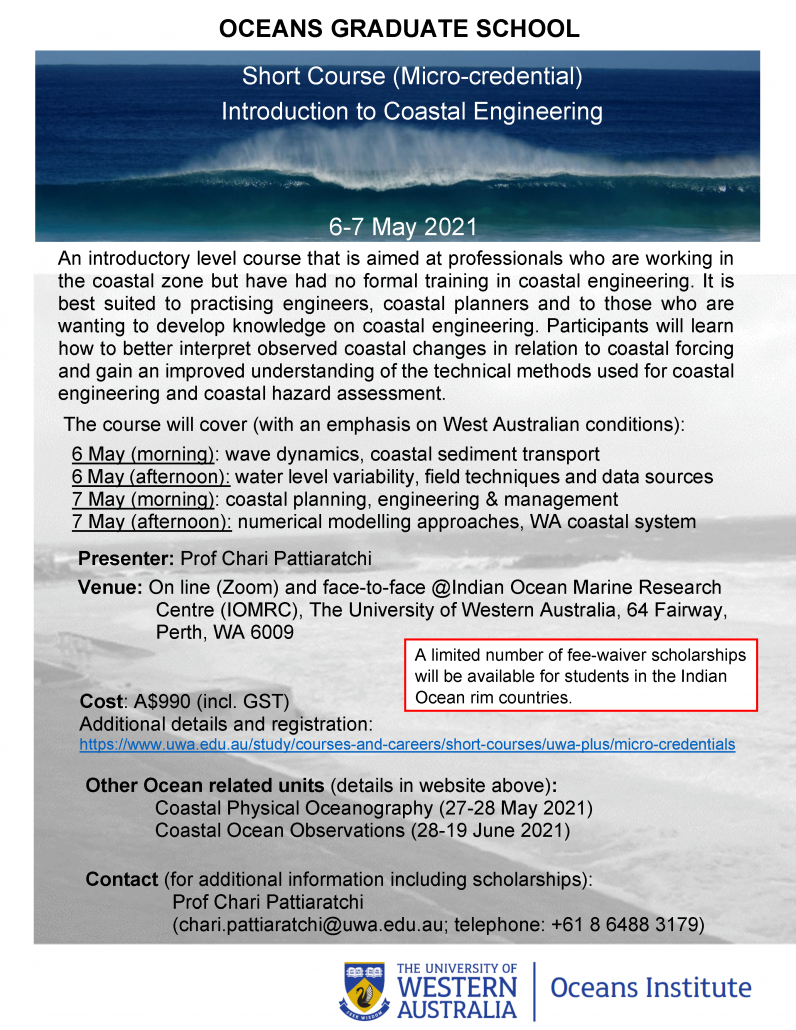 This seminar is being held in the Auditorium, Indian Ocean Marine Research Centre Building (or via Zoom)

Sea level variability occurs at different time scales (hours to decades) and is crucial for a range of activities including navigation, coastal stability and coastal planning. By contrast, societal concerns on sea level variability originate from potential impacts including coastal flooding, shoreline recession, damage to coastal infrastructure and natural resources. This is particularly true along the coasts of Vietnam and the Australian North West Shelf (NWS) that are susceptible to impacts from tropical cyclones (TC) and mean sea level change. This talk examines two themes: (1) seasonal and inter-annual sea level along Vietnam coast; and, (2) storm surge dynamics along the NWS.

Along the Vietnam coast, the seasonal sea level variability in open coast is dominated by a reversal of monsoons, whist in Tonkin Bay in the north is influenced by the Red river discharge. The inter-annual sea level in the open coast is driven by ENSO (El Niño Southern Oscillation), and is attributed to inter-annual change in boundary currents. The northern section of the Vietnam coast is dominated by the 18.6 year nodal tide whilst in the south, inundation in the Vietnam Mekong Delta is controlled by the interaction between ENSO and the 4.4 year lunar perigee cycle.

Along Australian NWS, the translation speed of a TC is a critical factor that determines generating mechanism and features of storm surge components. A combination between observations and numerical simulations utilizing the Regional Ocean Modelling System (ROMS) showed that the forerunner and continental shelf waves (CSW) were likely to be generated by a slow moving TC (<6  ms-1), whereas edge waves were attributed to fast translation TC’s (>6  ms-1). Magnitude of the forerunner and edge waves were sensitive to TC translation speed, but CSW was not sensitive to the translation speed of the TC.

Observational data obtained during passage of Tropical Low (TL) 14U in 2017 together with ROMS were used to investigate the generation of CSW and its interaction with topographic features that include Barrow and Montebello Islands. The TL 14U’s forward speed was close to a phase speed of the CSW resulting in an amplified CSW due to resonance. When the 14U and the CSW interacted with Barrow Island, the sea level increased by up to 40cm due to the blocking effect of the shallow water resulted in strong currents (~1.2 ms-1) flow diverted around  Montebello  Island due to blocking effects of topography.

Toan Bui is a PhD student under supervision of Professor Chari Pattiaratchi and Dr Ivica Janekovic. He received bachelor and master degree in Hanoi Water Resource University (Vietnam) in 2006 and 2015, respectively. His research is focused on sea level variability. Before coming to Perth, he worked as a lecturer at Hanoi University of Natural Resource and Environment.

Join from a PC, Mac, iPad, iPhone or Android device:

Please click this URL to start or join: https://uwa.zoom.us/j/83839539105?pwd=TlZvYWNSa1FZNUhzbEp2bTRIeVhHUT09

Or Skype for Business (Lync):

Join our panel of experts as we explore what knowledge is needed to support industry processes, regulatory requirements and meaningful stakeholder engagement to ensure future decommissioning decisions and approvals are underpinned by robust science.

The Oceans Institute Expert Series continues, with the next instalment focussing on the UN Decade of Ocean Science and the program of scientific activities currently taking place the UNESCO IOC Perth office.

Don’t miss out on this fantastic free event, and please share with your networks! 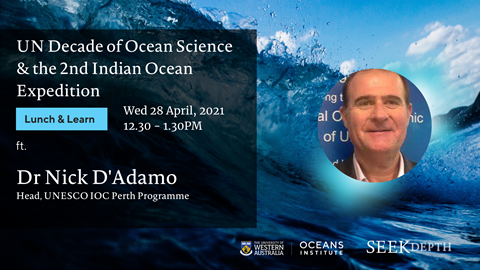 There are profound challenges facing scientific and user communities in addressing the informational needs and societal responses required to adapt and mitigate to a changing ocean and coupled climate. This applies to the Indian Ocean as a whole and for the globe’s inter-connected Earth systems. The World's attention on the oceans is experiencing a major renewed focus through the UN Decade of Ocean Science for Sustainable Development 2021-30 (www.oceandecade.org), and, closer to Western Australia, also through the Second International Indian Ocean Expedition (www.iioe-2.incois.gov.in).