Feature image: WAMSI Research Director Dr Jenny Shaw conducts interviews with members of the community at the Shark Bay rec centre in May

Work for the Shark Bay Priorities Project is well underway. There will be a number of outputs produced by the end of the year, including two publications: 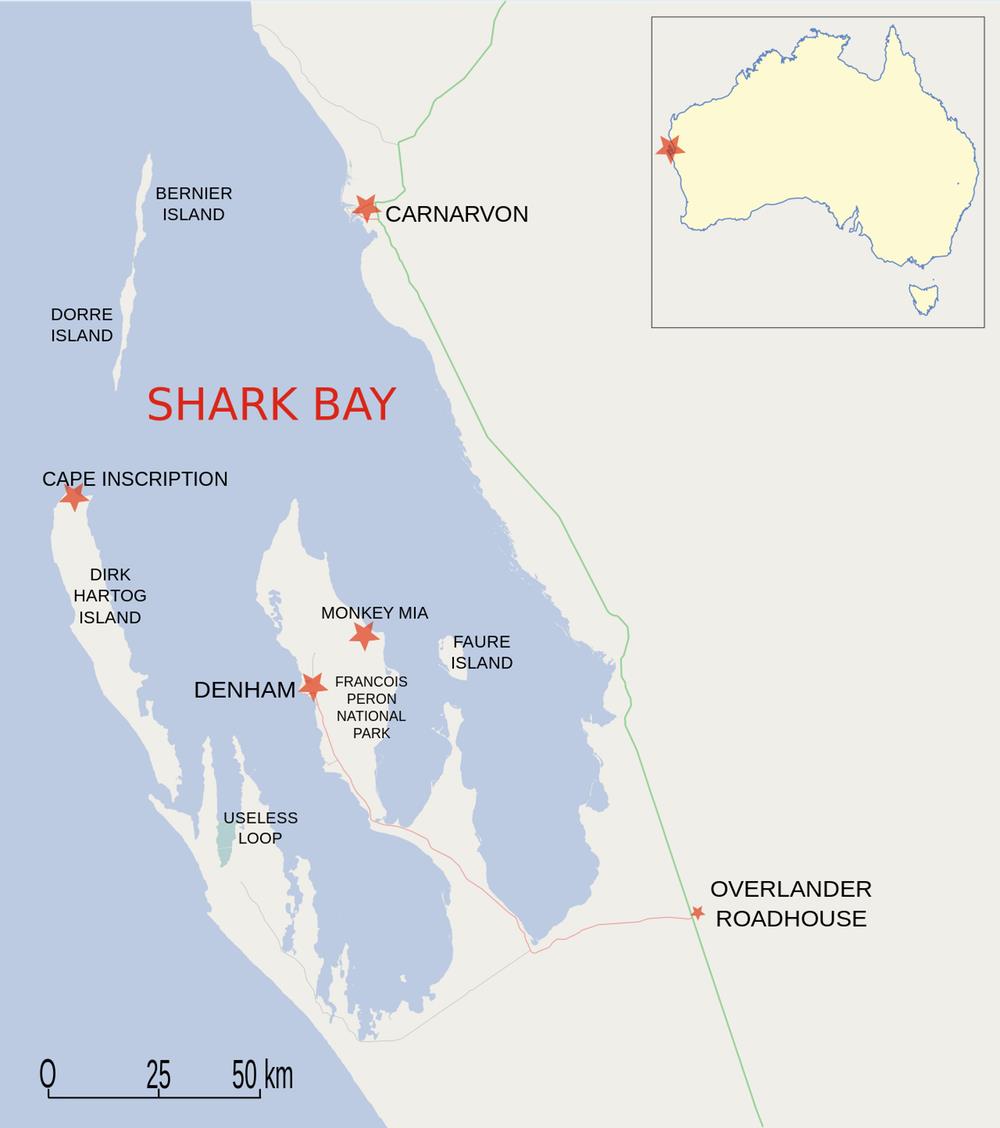 A large number of lead scientists (35), both local and international have been formally approached to contribute to the project by providing publications and metadata of their Shark Bay research.

This information has been supplemented with workshops and a literature search and so far has netted 530 research papers. The information is being synthesised under multiple categories (54) built from the Department of Biodiversity, Conservation and Attractions values and the Department of Primary Industries and Regional Development Ecoystem Based Management process.

There has been considerable engagement with the Shark Bay community with face-to-face interviews (47), workshops and presentations. Approximately 200 stakeholders (including community, Indigenous, industry, managers and researchers) have put forward their values, views and concerns for Shark Bay.

These data will be amalgamated to identify the gaps, prioritise the outcomes and produce a draft science plan for Shark Bay.

Below: a schematic diagram showing the WAMSI process for delivering the Shark Bay science plan. 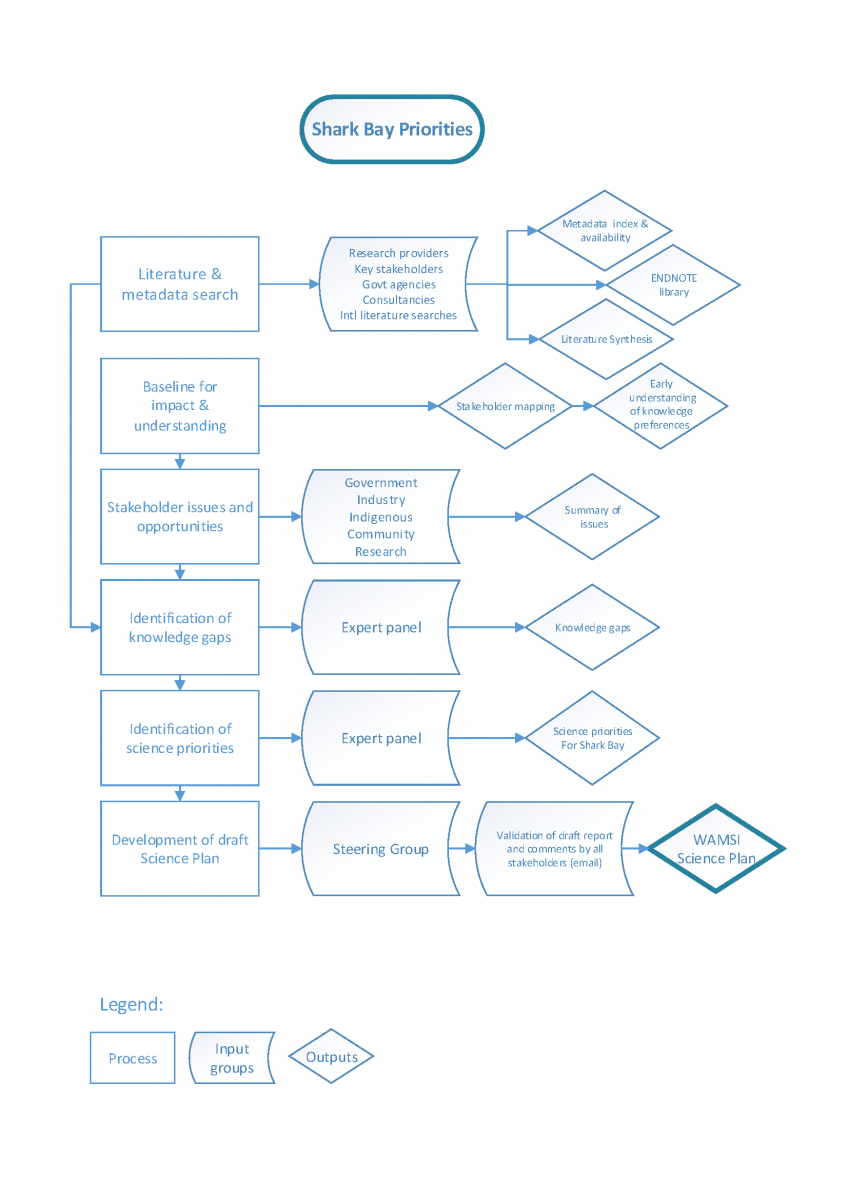 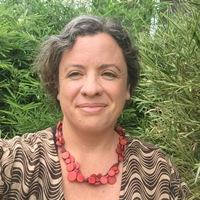 Acknowledging that partnerships and processes have not yet been established between scientists and the community in Shark Bay, the Western Australian Marine Science Institution has made a key community liaison appointment to support input into the marine science plan for the area.

Taking on lessons learned from WAMSI’s Kimberley Marine Science Program and the Kimberley Indigenous Saltwater Science Project, Gina Lincoln, from Mosaic Environmental, has been engaged to undertake this work.

Gina will offer the group assistance to start developing their own community-led research processes to inform how researchers engage with Malgana Traditional Owners.

Gina was recently involved in several aspects of the AMSA Indigenous workshop held in Fremantle in July, with the aim of ‘promoting the establishment of collaborative and respectful partnerships for sea country research and monitoring in Western Australia’.

The primary outcomes of the AMSA workshop were for:

One of the first tasks for the community partnerships and processes role will be to open a dialogue with Malgana people through their Land and Sea group, around Malgana saltwater Country research and science return priorities for Gutharraguda (Shark Bay).

A workshop is currently being planned to take place in Shark Bay within the next few months.

New guidelines for dredge plume modelling are being developed by CSIRO in partnership with the Western Australian Marine Science Institution (WAMSI).

Dredging activities form part of many coastal developments in Australia, ranging from small maintenance activities to large scale dredging campaigns which involve the removal of large amounts of sediment. Some of the dredged sediment can be stirred up in the sea water surrounding the dredger and the smaller sediment particles can be driven considerable distances by marine currents before settling onto the seabed. These clouds of suspended sediment are referred to as dredge plumes. Many dredge campaigns are conducted near sensitive marine ecological receptors (e.g. corals) and as such are subject to Environmental Impact Assessments (EIAs).

As part of the EIA process, potential impacts of dredge plumes on benthic communities and habitats are evaluated using the output of dredge plume models which are then compared to ecological thresholds. A challenge for regulators and proponents has been a lack of consistency in the approaches taken in setting up and executing the models, given there has been a lack of suitable protocol or standards to follow.

With funding support from the WAMSI Dredging Science Node, CSIRO is leading the development of a practical guideline for dredge modelling practitioners and environmental regulators. The guideline focuses on establishing a consistent and sound approach to the modelling of dredge plumes for predicting the pressure fields of suspended sediments when seeking EIA approval. This will help improve the quality and robustness predictions made by proponents through the provision of recommendations on modelling strategies and addressing specific issues around modelling, including source term estimation, 2D versus 3D modelling, ambient sediment dynamics, baseline data collection, and reporting of model parameters and data. The increased confidence should lead to a reduction in the monitoring and management burden required by regulators.

The Guideline is intended as a point of reference instead of a rigid standard and provides the current best practice for the application and review of dredge plume models in the context of Australian statutory EIA.

Contact chaojiao.sun@csiro.au or paul.branson@csiro.au to receive the Guideline when published.