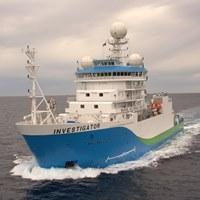 Aboard the RV Investigator we are approaching the middle stations along our 110°E line and have proceeded from cool, temperate waters to warmer more subtropical waters. Operations are proceeding smoothly – watches swop with 12-hour regularity, equipment gets deployed, samples get taken as per the daily roster and we no longer really know which day of the week it is!

The ship operates on a 24/7 basis and most of the scientists are on 12-hour shifts, which rotate at 2am and 2pm. The 2am shift has a few hours of steaming until the ship reaches the location of the next station and, as we are approaching it, a sonobuoy is deployed, the Continuous Plankton recorder is retrieved, and by 7am the CTD is descending to the inky depths of the Indian Ocean. This takes several hours as the seafloor is generally deeper than 5,000 m! As the CTD returns to the surface, the Niskin bottles are fired to collect water at the different depths as per the water budget. When the CTD is back on board there is an intense period of emptying of the Niskin bottles so that everyone can get the water they require for samples and experiments.
While the water is dispensed, other scientists start with different activities. Initially, the Indian Ocean Standard Net is deployed so that it can sample zooplankton in the top 200m of the water column. After this, when the sun is hopefully high in the sky, the optics team swings into action deploying a range of equipment to measure the optical qualities of the water column. While this is happening, “lunch” is served – though it is not uncommon to see someone having cereal or Vegemite on toast as that time slot equates to their breakfast!
The 2pm to 2am watch starts with some netting action – the oblique tow for mesoplankton is followed by the 90-minute tow with the EZ net that yields stratified zooplankton samples in upper 500m of the water column. On the steam back to station the micro-zooplankton sampler is deployed and once back on station we use the fine-mesh Heron net for a vertical haul for the small zooplankton that are prey for the many larval fishes that we are catching. Then, the physical oceanographers get back into action and deploy the Vertical Mixing Profiler. And, as the sun sets over the Indian Ocean, it is time for “dinner” though for some it is now lunch!
Evening sampling commences with repeated tows of the surface neuston net to catch plankton that migrates to the surface at night. This entails factory-like activity in the laboratory as the contents of each tow are separated, identified and frozen for food web analyses or preserved for genetics. Then, another oblique mesoplankton haul before we settle in for an evening, shallow CTD (only 500m depth) from which most of the water is used for a series of on board incubation experiments. There is a further night-time vertical Indian Ocean Standard Net haul and then we are into another EZ net deployment with flashes of bioluminescence showing up on the screen as the denizens of the deep streak by. After 90 minutes, the net is back on deck and the samples start to be sorted and identified. Finally, the CPR is deployed out the stern and the RV Investigator is on its way to the next station up the 110°E line. Soon, the 2am watch will appear clutching their mugs of coffee and ready to see what the next station brings…

And, yes, it must be near the weekend as the footy tipping competition is in full swing!