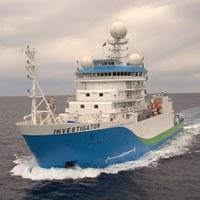 It’s getting warmer and we are loving it!

Studies of marine bio-optics are being conducted from the RV Investigator during the 1100 East voyage.

Marine bio-optics is the scientific study of interactions between electromagnetic radiation (near ultraviolet to the visible and the near infrared) and particles or dissolved substances of biological origin in the water.

The interaction is described through absorption and scattering, which are referred to as inherent optical properties (IOPs).

These properties only depend on the composition of the medium, and not on the way it is illuminated (e.g. sun light on a clear day versus a cloudy day etc.).

By measuring these IOPs and the quantities that determine them (e.g., particle sizes, particle composition and pigments), one can derive bio-optical algorithms.

From the ship we will make in-situ measurements of the IOPs using a range of instruments as well as measuring particle sizes and composition.

Satellite ocean colour radiometry is the technique by which we quantify phytoplankton biomass from space.

Proxies of this biomass, such as chlorophyll concentrations can be derived from the satellite observations of the ocean.

The launch in 1978 of the first satellite carrying an ocean colour sensor, revolutionized the way oceanographers saw phytoplankton dynamics in the ocean.

The obvious advantage of this satellite technique is the provision of uninterrupted data sets over the world’s oceans which can be used in a wide range of science studies and applications.

A major transition is currently underway from science-driven satellite missions of limited lifetime (5 to 10 years) to more operational satellite programmes designed to provide consistent and continuous observations over many decades.

The recently launched European Copernicus program is one such example.

During the 110°E voyage we are collecting data for validation of the monitoring products delivered by the Copernicus “Sentinel3/OLCI” mission.