Notes: We have seen a white-tailed tropicbird, a frigate and two golden bosun birds! We are really in the tropics!

By Micheline Jenner AM and Curt Jenner AM

Despite their huge size, blue whales are remarkably elusive. Criss-crossing the world’s oceans as part of their life cycle, these days, they are hard to find. Being so large–in fact, the largest animals on earth, blue whales were once the most desired target species for 19th and 20th century whalers. The effort outlaid to chase and capture a whale, known as the catch-per-unit effort was categorized by the whalers as a “1” for a blue whale. The smaller humpback whale was classed as a “4”, indicating that it took four humpback whales to provide the same amount of oil as one prized blue. Alarmingly, in their efforts to provide for lighting of motherland lamps, produce lipstick, wear fine corsets, consume margarine and shade with umbrellas, whalers killed 202,000 to 311,000 Antarctic blue whales and 13,000 pygmy blue whales.

The first blow as a pygmy blue whale surfaces can be up to 9m high. Subsequent exhalations throughout a surfacing sequence, sometimes diffuse in light winds causing a “rainblow” effect. Photo: Micheline Jenner AM.

Now in the 21st century, cetacean scientists are still trying to determine how many blue whales are left in the world’s oceans. The IUCN recognises a global estimate of between 10-25,000 blue whales. Just what proportion of that estimate consists of Antarctic blue whales or pygmy blue whales, is anyone’s guess.

By listening to the sea with sonobuoys from RV Investigator, we are documenting the migration of pygmy blue whales while they migrate from their austral summer/spring feeding areas in the Bonney Upwelling off Victoria and the Perth Canyon, Western Australia to warmer Indonesian waters for the austral autumn/winter. Blue whales make very low frequency calls ranging between 20-70 Hertz (Hz). These rumbles are so low, that without speeding up the sound, they are, in fact, not audible to humans. However, with custom software, we can see the sound and these rumbles appear as big green lines on our computer screen! 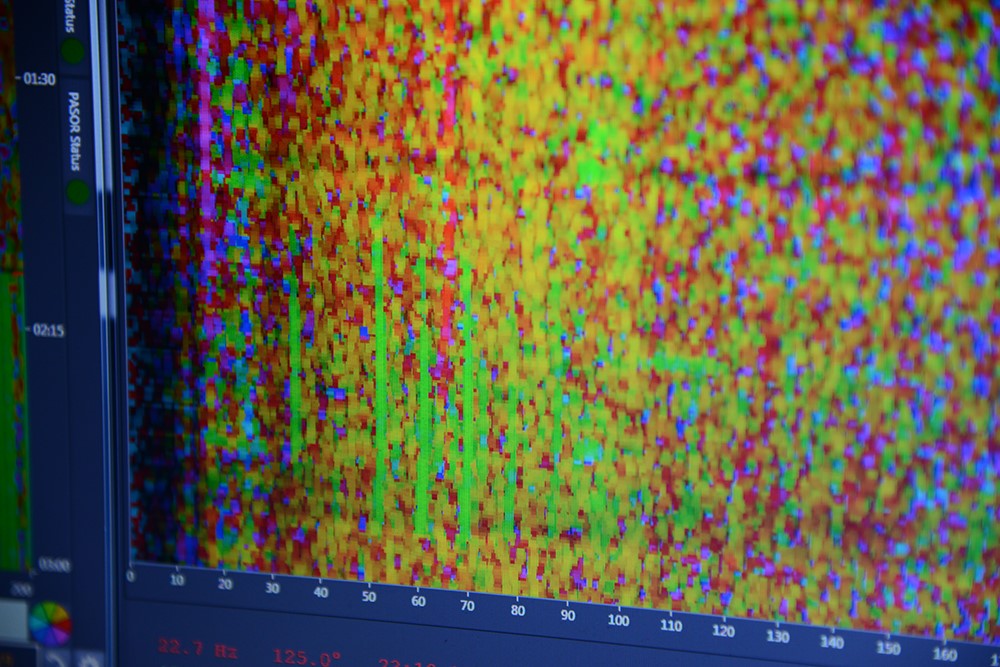 Distinctively, the green vertical lines are a pygmy blue whale call, in the low frequency range of 20-70Hz. Underwater sounds collected by the hydrophones in the sonobuoys which are then computer-processed, allow us to see the sound on board RV Investigator, while the whale is calling. This is live from the Indian Ocean! Photo: Micheline Jenner AM.

Pygmy blue whales depend on krill for their very survival and lots of it–they consume up to 2 tonnes of krill per day! On their migration north the whales are actively stopping to feed. During the day when the ship is stationary and all the scientists are collecting various water and biological samples at the twenty stations on the 110° East meridian, we have been monitoring the sonobuoys. We have plotted the direction of the migration of pygmy blue whales hoping to photograph some of them migrating and feeding. However, maybe those scientists studying zooplankton on board RV Investigator are hoping that we are not joined by a pygmy blue whale as, there could go, all their samples, down the greedy gullet of a 22m long pygmy blue whale!

We can hear the whales calling and their unique feeding calls and we know they are migrating north. Just one glimpse of a pygmy blue whale on this IN2019_V03 voyage and we are sure you will hear our joy from wherever you are! Perhaps, as we travel south past the Ningaloo region we might just see one! Hearing is awesome, but seeing them is pretty good too–here’s to hoping!