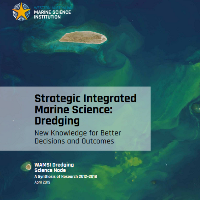 A report released on one of the largest single-issue environmental research programs in Australia that gained unprecedented access to industry dredging data, has been recognised by industry and government as a ground-breaking step forward for environmental regulation.

“Strategic Integrated Marine Science: Dredging – new Knowledge for better decisions and outcomes” is a synthesis of research from the WAMSI Dredging Science Node was released today by WAMSI CEO Dr Luke Twomey at the AMSA Conference in Fremantle.

The findings from the five-year Western Australian Marine Science Institution (WAMSI) Dredging Science Node (DSN), are contributing to increased confidence, timeliness and efficiency of the environmental approval and regulatory processes associated with dredging projects, which is ultimately expected to reduce the cost to government and industry.

According to WA Environmental Protection Authority Chairman Dr Tom Hatton, it’s estimated that monitoring and management costs can exceed $100 million on a major dredging program in addition to the predictive uncertainty of risks to the environment itself.

“This program has delivered on its promise in full and in a form that has increased the confidence, timeliness and efficiency of the environmental approval and regulatory processes associated with dredging projects,” Dr Hatton said.

“The Dredging Science Node was valuable for industry and the state – it provides important technical data to improve our environmental impact assessments and support industry approval documentation. By bringing together the key stakeholders – state, industry, ports and research agencies – we maximised the available funding and the scientific knowledge that came from the Node. This knowledge will support better and more concise dredging-related environmental impact assessments moving forward,” Mr Smith said.

The Node’s 114 scientists from 26 research organisations gained unprecedented access to environmental monitoring data on four large-scale capital dredging projects in the Pilbara region including the Pluto LNG project at Burrup Peninsula (Woodside), Cape Lambert A and B projects (Rio Tinto), the Gorgon project at Barrow Island (Chevron), and the Wheatstone project at Onslow (Chevron).

WAMSI Dredging Science Node Leader, Dr Ross Jones from the Australian Institute of Marine Science said the Node had brought together a raft of scientific literature on sediments in the water column in relation to dredging.

“Little of the available research on sediments was able to be used by dredging proponents and regulators to adequately assess risk, so we have designed the Node as a tool that gives industry and regulators greater confidence to better predict environmental outcomes around dredging,” Dr Jones said.

WAMSI CEO Dr Luke Twomey said the more than 55 scientific publications produced by the Node so far was an extraordinary achievement for the investment and will go a long way towards much more informed debate and decision making on how best to predict and manage the potential impacts.

WAMSI DREDGING SCIENCE RESULTS IN USE