Notes: As we travel northward along the line we are seeing a steady change from cool-temperate to sub-tropical conditions.

Listening to the Sea

By Capt Curt Jenner AM and Capt Micheline Jenner AM

For decades open ocean surveys for cetaceans have involved visual observations with field binoculars and identification guides. Using technology from World War 2, a new version of an old tool is currently assisting scientific surveys. Sonobuoys, underwater microphones (hydrophones) developed by the military, are now available for scientific research, such as those provided by the Australian Department of Defence for this project. Initially designed to detect enemy vessels by tracking acoustic “targets”, whale researchers can now track biological targets namely cetaceans (whales and dolphins), simply by listening for their calls. Presence and absence data, leading to abundance estimates, can be collected while transiting ocean basins. Amazingly, the listening strip width of acoustic surveys is 150 nautical miles or 280 km, which is 75 times more effective than the two nautical mile visual survey strip.

Each cetacean species creates unique calls, transmitting sounds on varying frequencies. Travelling the deep water of the south-east Indian Ocean with several daily sonobuoy deployments, the most prevalent acoustic detections by the Jenners so far, have been pygmy blue whale calls. At the first and most southern station, Antarctic blue, minke and fin whales were also recorded.

The IIOE-2 survey is providing new understanding regarding the characteristics of pygmy blue whale migration paths, particularly in concert with the collected oceanographic data. By tracking the direction of all the pygmy blue whale acoustic detections while RV Investigator moves northward along the 110°E line, the pygmy blue whale migration path towards Indonesian calving grounds, can be carefully documented. This is important because the presence or absence of animals such as whales, some of which feed low down on the food chain can lead to a better understanding of the health of the Indian Ocean. Are the blue whales travelling in large herds, individually or in twos and threes? Are they following specific isotherms (temperatures) while searching for productivity hotspots?

From the decks of RV Investigator, Curt and Micheline Jenner are keen to visually observe some migrating pygmy blue whales. So far the sounds are alluring… but actual sightings of the animals have been elusive. Thirty years of research has taught the whale team to remain hopeful! 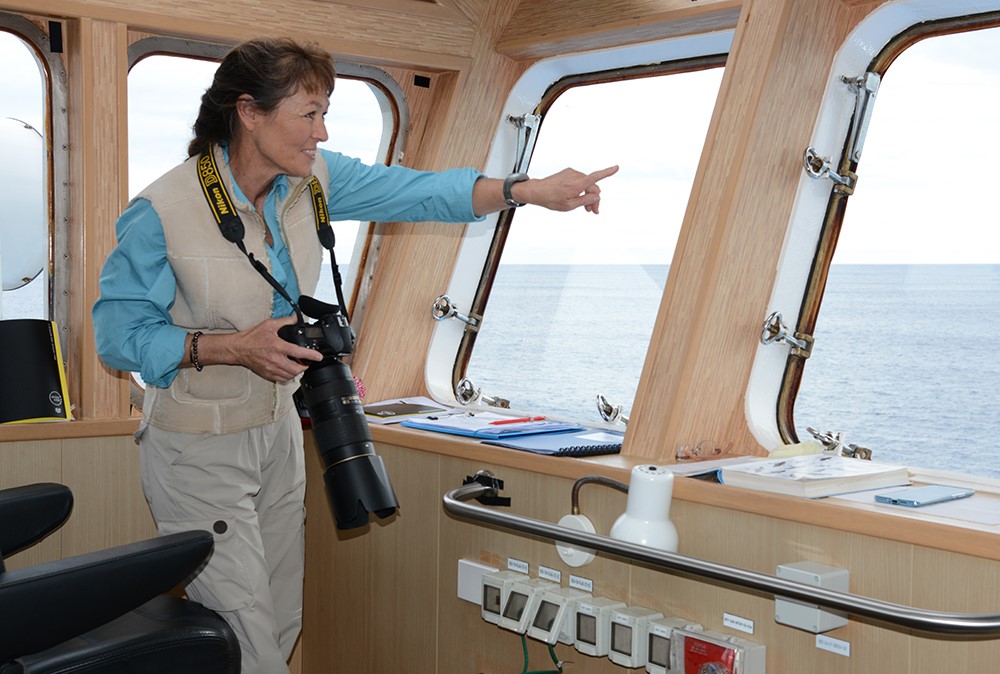 Aboard RV Investigator from the 7th level observation deck, ten-minute seabird surveys each hour, during daylight hours are also being conducted by Curt and Micheline. Here Micheline Jenner is on the look out for Light-mantled sooty albatross, her favourite of the ocean soarers. The most frequently sighted seabirds so far have been Flesh-footed shearwaters, which breed on the islands off the west coast of Australia. Photo: Curt Jenner AM.

With the acoustic survey, plus visual observations for cetaceans and seabirds, three new data streams have been added to the wide range of oceanographic and biological research on this second International Indian Ocean Expedition voyage (IN2019_V03).