The objective of the workshop was ‘to continue the process of integrating the work that has been done across the node into the EBFM framework in a manner that can be used for ongoing management’.

The WAMSI Node 6 annual symposium was held on 26 November 2010. The main topics of the symposium included:

The symposium provided an opportunity for many of WAMSI’s 31 postgraduate students and young postdoctoral fellows to showcase their research before an audience of peers and senior scientists.

A workshop to discuss sustainable fisheries and sustainable ecosystems was held at the Fisheries Marine Research Centre in Hillarys, Perth, in June 2010.

Western Australian university students led discussions on research at Ningaloo Marine Park and its surrounding areas at a forum in Perth on 30 March 2010.

The proceedings can be found in this document.

Dr Waples is a senior research scientist at the Department of Environment and Conservation.

The impacts of a warming Indian Ocean on Western Australia’s climate, environment and fisheries was discussed by scientists at a Western Australian Marine Science Institution (WAMSI) symposium. 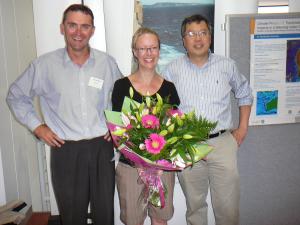 More than 100 two-minute ‘newsflash’ presentations by scientists from government, academia and private industry gave an outline of most of the State’s marine research now occurring in the Kimberley, Pilbara, Gascoyne, Perth, the South West and the South Coast.

Speakers discussed the dazzling array of new corals being discovered in the Kimberley region, the presence of heavy metals, tsunami warning systems, ocean temperature and current speed forecasting, the impact of coastal developments, fisheries biology, social uses, dredging of ports, the discovery of new sponges, environmental pests (there are 55 known to impact WA waters), monitoring estuaries, and how particles and larvae are being distributed by the Leeuwin Current.