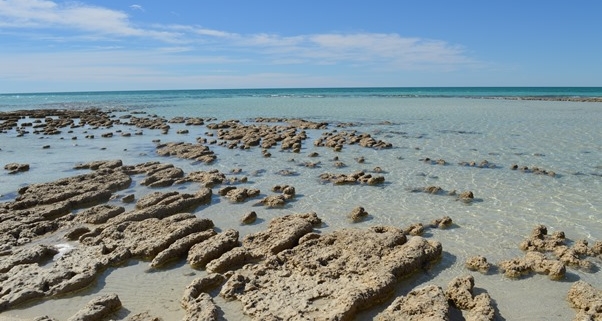 A research team, surveying values that are important to the people of Shark Bay, is finding a variety of views are attached to the World Heritage area famous for its marine life and ancient stromatolites, with an economy that largely relies on the success of tourism and fishing industries.

More than 30 members of the community were surveyed last week in this first round of interviews  including representatives from local and state government, fishing and tourism business owners, long-term residents and Indigenous rangers.

The Western Australian Marine Science Institution (WAMSI) will continue to conduct interviews over the coming weeks to determine the values, issues and concerns.

WAMSI Research Director Dr Jenny Shaw said initial indications were that there is a broad range of views across Shark Bay.

“Values held by the people of Shark Bay were varied but some common themes have begun to emerge,” Dr Shaw said.  “There was widespread awareness of the massive seagrass loss from the 2011 marine heatwave and concerns about how that might have affected any changes in the bay. Tourism and fishing were also common themes.

“What we’ll do first is collect the research that’s already been done to look at whether some of the answers can be found in those bodies of work.

“Once we’ve brought together all the existing research, we can identify where there might be gaps in knowledge that relate to the values we’ve identified in our interviews. We’ll then develop a comprehensive science plan for Shark Bay to address those gaps.

The RAC Monkey Mia Resort recently doubled its capacity from around 600 to 1200 guests per night. It’s estimated that the resort accommodates less than one third of the total number of visitors who enter the national park to see the dolphins.

This week’s Fishing Fiesta will see the return of some 100 recreational fishers and their families to the town of Denham.

Bag limits for some fish species in Shark Bay are higher than tourist destinations further south, making the region an attractive option for recreational fishers throughout the year.

The Shark Bay Stakeholder Values report and gap analysis is expected to be completed by the end of the year.